​Paintings are available as: 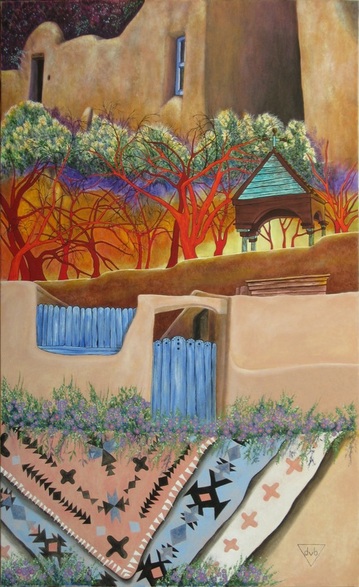 There is a very old expression in Santa Fe that refers to the often secret and scandalous private lives of many of its citizens in the past……”Life behind adobe walls.”  This latest painting for the Santa Fauve Collection is a “montage” of walls around the Santa Fe area.  This is not meant to be a “cityscape” of a view down a street but a montage of four walls brought together for comparison under the filter of the title phrase.

Many of the oldest structures in Santa Fe were an integration of the wall and the residence into one structure.  Often the gardens and other open air features of the property were surrounded by these wall/hacienda constructions.  Later, architecture began to have the walls built away from the main building with the home in the center and the walls constructed as a perimeter protective element.

Just as every wall is different from the next one, so is the life being lived behind those walls.  I have depicted a few varieties through painting styles and colors.  Also, to further emphasize the separation of the walls, the light source in Walls #1 and #4 is from left to right and the light source in Walls #2 and #3 is from right to left.  A subtle difference, but one that should at least register with the viewer on a sub-conscious level when studying the painting in person. 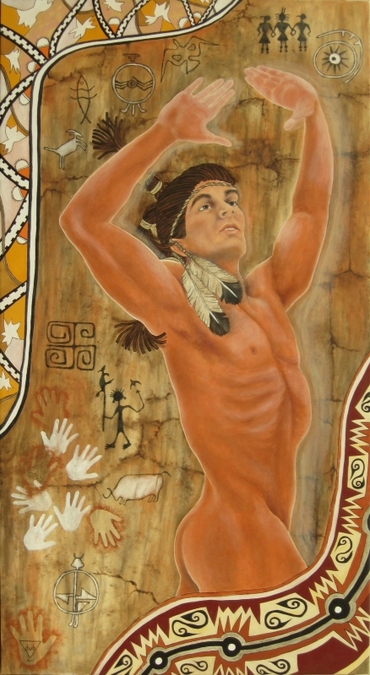 I painted this in the same Art Deco style used for the painting, “Our Lady of Guadalupe.”  As in “Our Lady” I utilized a religious icon format with the face being painted in 3-dimensional Realism and the rest of the painting in a 1 or 2 dimensional “flatness.” The Anasazi (whose name in Navajo means “Ancient Ones”) are also known as the Cliff Dwellers.  Evidence of their civilization can be found as far back as 6,500 years ago.  There is no trace of their culture after 1,200 C.E. The primary elements of this composition suggest “Movement, Energy and Circles (the Circle of Life).”  A shaman was thought to have the ability to communicate with other “entities” whether human spirits or those from the Animal Kingdom.  A shaman was also believed to possess the abilities for healing, whether that took the form of a physical healing or more of a spiritual healing.

The everyday life and utensils used by the Anasazi reflected a “black or white” consciousness.  Much of their pottery was decorated in white and gray with black outlines and lines.  Some of the warmer colors found in the desert were also added to their pottery.  The upper and lower “borders” of this painting are directly adapted from Anasazi pottery.  I found the level of sophistication in their designs very fascinating, though thousands of years old.  In the upper pottery design, the random flourishes/embellishments that remind me of a floral design also look exactly like designs used by Matisse (the most famous of the Fauvists) in his large-scale collages created in the latter years of his life.  (I wonder whether he had seen some examples of this ancient pottery in museums?)

Petroglyphs are found in abundance among the cliff dwellings of the Anasazi.  They were used to tell stories, as “signatures” for the dwellers and as a talisman for spiritual ceremonies of everyday life.  Beginning at the lower left side of the painting, here is an explanation for each petroglyphs I used: 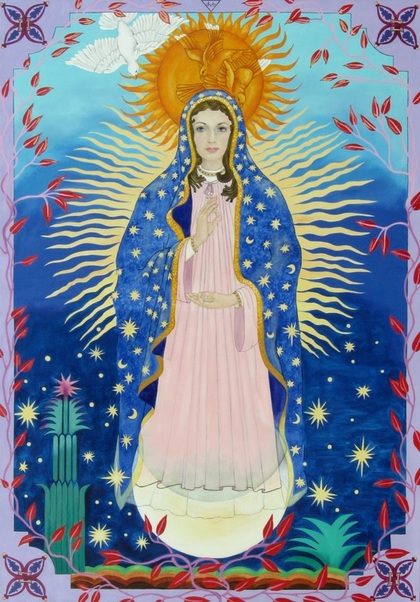 Our Lady of Guadalupe

An explanation of the research and symbolism behind the painting "Our Lady of Guadalupe" can be found in the 02/05/2010 Blog entry. 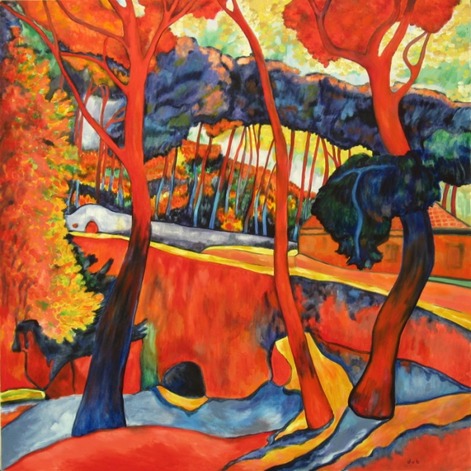 Almost every tree in the paintings of the Santa Fauve Collection is painted with its trunk and branches a shade of red. In Feng Shui, and in many cultures worldwide, the color red represents "life force/growth/superior health/strength." In the grand scheme of things on our planet, trees definitely play that role with their production of life giving oxygen and their processing of harmful carbon dioxide out of the atmosphere. 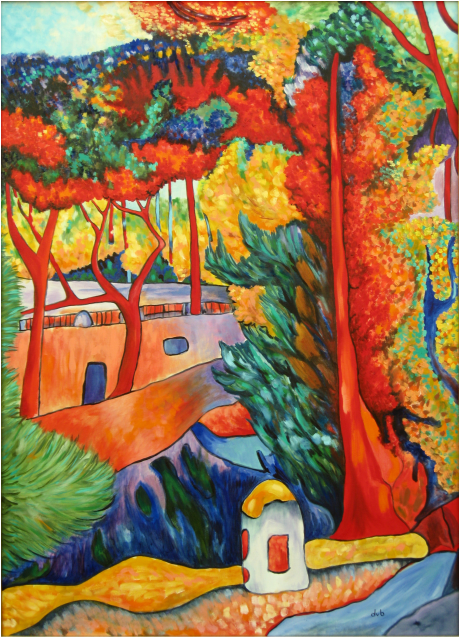 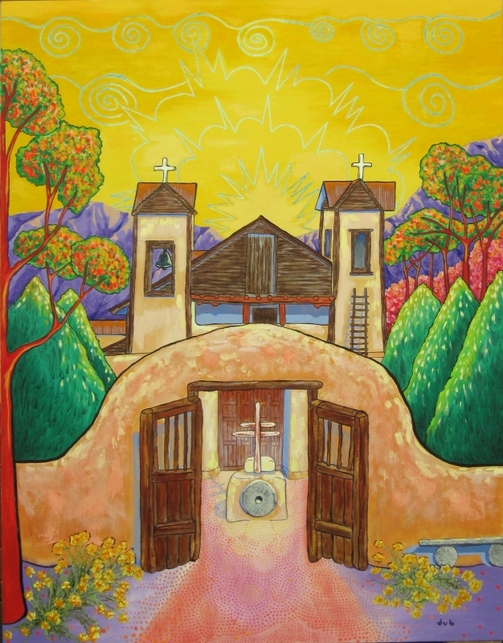 This is a painting of the small church in Chimayo (north of Santa Fe) that was built in 1810 and is known throughout the world as "The Lourdes of North America", due to the "supposed" healing properties of the dirt around the altar. The "impression" I received before painting this was to paint the sky the color of Chamisa (a native plant in Northern New Mexico) and to use the technique known as "sgraffito" to give details to the sky portion of the painting. Sgraffito is achieved by scratching away paint to reveal the white gesso on the surface of the canvas underneath. Before painting the sky I applied additional layers of gesso tinted with light turquoise paint. 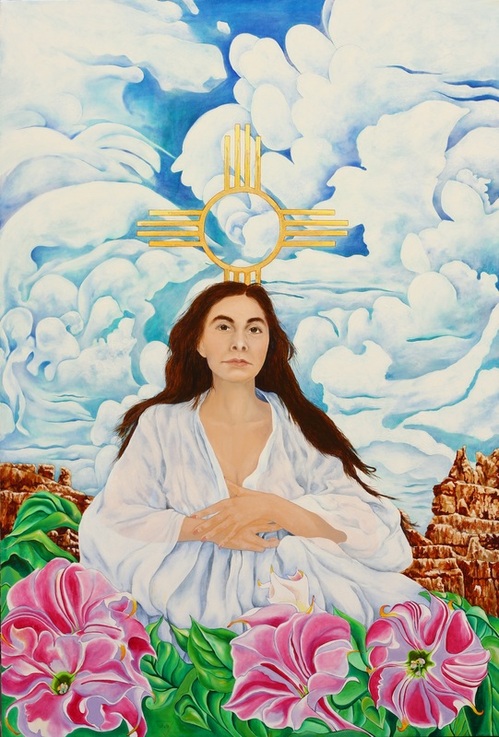