David von Braun has spent the last 30 years living in the most dynamic and inspiring cities in the United States--Los Angeles, San Francisco, New York, Dallas, and Santa Fe. After studying painting with Alexander Hogue and earning a BFA in Art from the University of Tulsa, David worked in various design fields, absorbing the creative energies of his environment and honing his artistic sensibilities. Throughout his many-faceted career, David's spiritual journey has informed his work, and is the primary drive behind his life as an artist and the current Collections of his "multi-dimensional" paintings.

"Throughout my adult life (post-college) I often told myself 'Someday I'm going to paint.'  On the first of July in the year 2009 I finally came to the realization that 'SOMEDAY IS NOT A DAY OF THE WEEK.'  So, for the first time since my painting classes with Alexander Hogue, at the University of Tulsa, I gathered my painting supplies, fought my doubts, fears and inner demons, put brush to canvas and began to paint my first painting.  The results of that 'Shift in Consciousness' can be seen in my Collections."
Interview on 2 December 2022

the power of three

The Number Three
In the related Numerolinguistics of Kabbalistic, Vedic and Chaldean Numerology the “Number 3” represents: In summation, the Number 3 energy is “creative, expressive and innovative."

Each letter in every alphabet has a related numerical vibration. The letters “d”, “v” and “b” in the Western alphabet have a combined vibration of “3” in the Kabbalistic, Vedic and Chaldean Numerologies (the same numerolinguistic symbolism that is used in the writings of the Old and New Testaments of the Judeo/Christian Bible).

The Triangle
In metaphysics the three sides of a triangle represent “Mind, Idea, and Expression.” Philosophically, the triangle represents “Spirit, Soul, and Body.” In spirituality, the triangle – especially the inverted triangle – represents Spirit descending, as well as the Feminine Divine (the “Creative” aspect of the Cosmos).  The inverted triangle also represents the 8th level of the Sri Yantra (Sacred Instrument) which corresponds to the 7th Chakra.
First painting - age 15 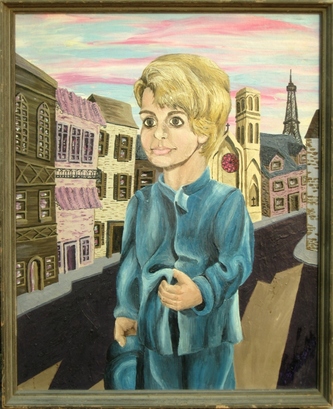 Three Guides
While in high school I had an appointment with a Spiritualist Reader my mother and some of her friends often consulted. I went to see her out of curiosity and general boredom, more than anything else. Two weeks before my appointment I had a memorable dream where a tall Native American played a significant role. He told me that his name was Lone Feather and that he would always be available to help me. All I needed to do was ask. During my session, the Spiritualist told me I had a very prominent Native American Spirit Guide she could see standing behind me at that moment. She also told me she could see an older gentleman, dressed in “white tie” evening wear and behind him stood a young man wearing a “sailing suit” (attire for sailing on a yacht, during another era). During the next 30 years I was told about the same three Spirit Guides, though often they were in differing orders of importance and influence. The Spiritualists were: All five spiritualists "saw" the same three spirit guides, although I never revealed to any of them that I had been told about these three by other Spiritualists.

The Color Purple
On the 29th of August in 1999, at the Chapel of Flowers, in Van Nuys, California, Rev. Chaneske revealed to me, in a reading, the identity of one of the three guides and why that particular Guide would play a prominent role in my life from now on. Below is the transcription of the specific segment of the reading that referenced this particular Guide. (E = Rev. Evelyn Chaneske and D = me)

E: I want to ask you what you have to do with France?

D: In this lifetime, I don’t know.

E: You were there in another lifetime. Do you know that?

E: I’ve seen you sitting here each Sunday and I’ve seen you as you were in France. You have this striped shirt on and a knotted scarf tied around your neck. You’ve been French, okay. I don’t know why Spirit is telling me this. There must be a reason. You’re on the seas. Not as a sailor but on a yacht. You’ve also been a very free spirit – a very flamboyant person. Have you picked any of this up?

E: Okay, because you have attracted this artist who is French. You knew him when you were in an incarnation in France, okay? You were friends then and you’ve attracted this gentleman to you. I always see him standing behind you and wearing the same type of sailing attire as you were wearing at that time. There’s something about purple. I don’t know whether you work with purple. Do you?

D: No, not specifically.

E: Do you have a purple shirt?

D:I have had in the past.

E: If you think of it, put that on to attract this spirit…with the art, okay? Many more entities will come to you and work with you, okay? There’s a change coming to you…a move coming to you. I feel you won’t stay there for long. I feel that wherever you’re going to next you’re not going to be there for long. It’s fine for a while and then, you’re not going to be in 100% harmony. I feel you…I feel you need to be near water. Think about this when you go if you get…I don’t want to say disturbed…but, aggravated and you’re ready to move on. Alright? You have an American Indian with you….who did healing. Do you do healing?

D: Well…maybe at some point on some level.


[NOTE:  One year after this reading I moved from Los Angeles to Santa Fe, New Mexico. I felt that “Spirit” drew me there, but after four years I moved from there, mainly frustrated that I was not actively creating “art.” I needed to regroup and attempt to find a clearer perspective regarding the direction of my life.

Currently, as I paint mt Collections I always wear purple, whether it is a purple shirt or a purple scarf. While wearing purple I never experience “artist’s block” or any confusion about painting techniques or styles. The thoughts flow. The creativity flows and the paint effortlessly covers the canvas.]